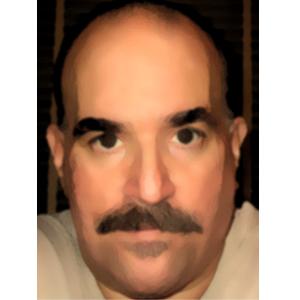 As one of the founding members of the seminal punk/metal excursion out of The Bronx known as Cold Sweat, Russ Mate established himself as a drummer during the early days of their run from 1981-1990. Along with fellow founders Keith Haase (guitar), Rich Casale (vocals) and Warren Kitt (bass), Russ produced their first 45 single release on Power Voltage Records. That record, “Chain Your Mind” b/w/ “Hide And Seek”, has been re-released and the songs are now available as free mp3 downloads at www.powervoltagerecords.com. “Chain Your Mind” was recently included on the U.S. and Canadian punk 45s 1977-1984 compilation CD, “Hyped To Death” #51, which is available at hyped2death.com. As Cold Sweat’s sound, lineup and direction changed, Russ would become the band’s keyboardist. They received local airplay, which included rotation, and performed throughout the New York City area until they disbanded in 1990.

That same year saw Russ Mate join the New Jersey based, hard rock band, Mutley’s Rockit as their keyboard man. Ex-Cold Sweat bandmates Keith Haase and Laura Manfredi, on guitar and bass respectively, were on board along with Henk Schipdam on drums and, of course, Mutley on vocals. During his stint with the Rockit, Russ recorded and performed with them in and around New York City. Artistic differences were the reason behind his decision to part company with the group by 1992.

That year, along with drummer Chris Saia and Cold Sweat bassist Warren Kitt, he formed Machine Head — The Deep Purple Tribute. Also included in the original lineup was vocalist Rob Cassese and guitarist Guy Stevens, who would go on to record and perform with former Hole/Smashing Pumpkins bassist Melissa Auf Der Maur in the Black Sabbath tribute group, Hand Of Doom. Machine Head performed many successful shows throughout New York City and New England. Following a number of personnel changes, Russ decided to move on.

In 1994, he performed the fiery organ solo and other keyboard parts for Neon Fire’s single release, “Like Sand” b/w “Moon Over New York City”.

In 1995, under the name, Mate, Russ released a single on the Power Voltage label called, “Blue Water”, produced by Peter Goldbeck which featured, along with Mate on keys, Josh Charles of J.C. Bosco on vocals. The song was composed by Russ Mate and Mike Fass of Neon Fire and, more currently, Doomed Airship. The flip, “Across The Miles”, was a remake of the 1983 flip side of the 1985 Neon Fire single, “Life In Duplicity”. This new version of “Across The Miles”, written by Mike Fass, featured Josh on lead vocal and Mike on harmony.

That summer, Russ produced Neon Fire’s final single, the epic “Sir Wendell”, in addition to providing the organ and piano tracks. It would be his production masterpiece for 1995 and, by the end of the year, his last effort for a while as a musician and performer, as he focused more on his other enterprises.

Ocean Storm, Endless Journey, and other tracks from the debut Just Offshore album are featured on the soundtrack of the documentary film The NYU Suicides.